Discover the Trois-Fontaines-l’Abbaye (51) storage site, a depleted natural gas deposit which was converted into a storage facility in 2010. 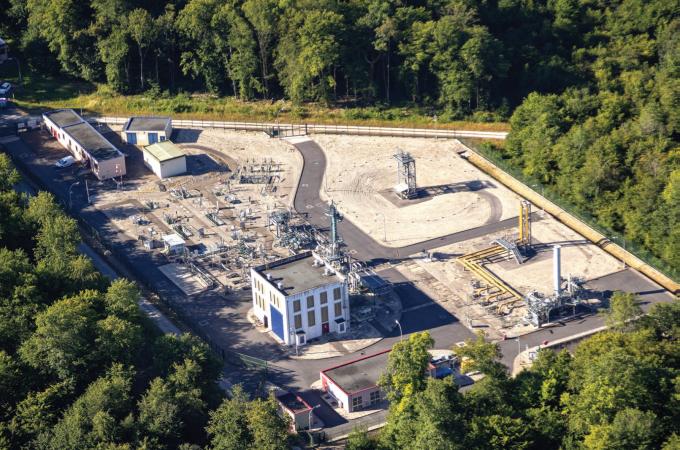 After having been put into reduced operation in 2014, the Trois-Fontaines-l’Abbaye storage site will be restarted by Storengy in the first term of 2022.

The restart of existing facilities will allow for some of the gas still present in the reservoir to be withdrawn from the storage. Unlike our other, active storage sites throughout France, no gas will be injected here. The revenues from the gas sales will contribute to dismantling or converting the site at the end of its operation, in about 15 years.

This project aims to completely rehabilitate the site in consultation with local players (administrations, public authorities, communities, associations, residents). The first stage, which is due to start in 2022, for about 15 years, will comprise the withdrawal of part of the natural gas which is still present in the underground, about 8 TWh, the equivalent of the consumption of the Saint-Dizier, Der and Blaise urban community over 20 years. 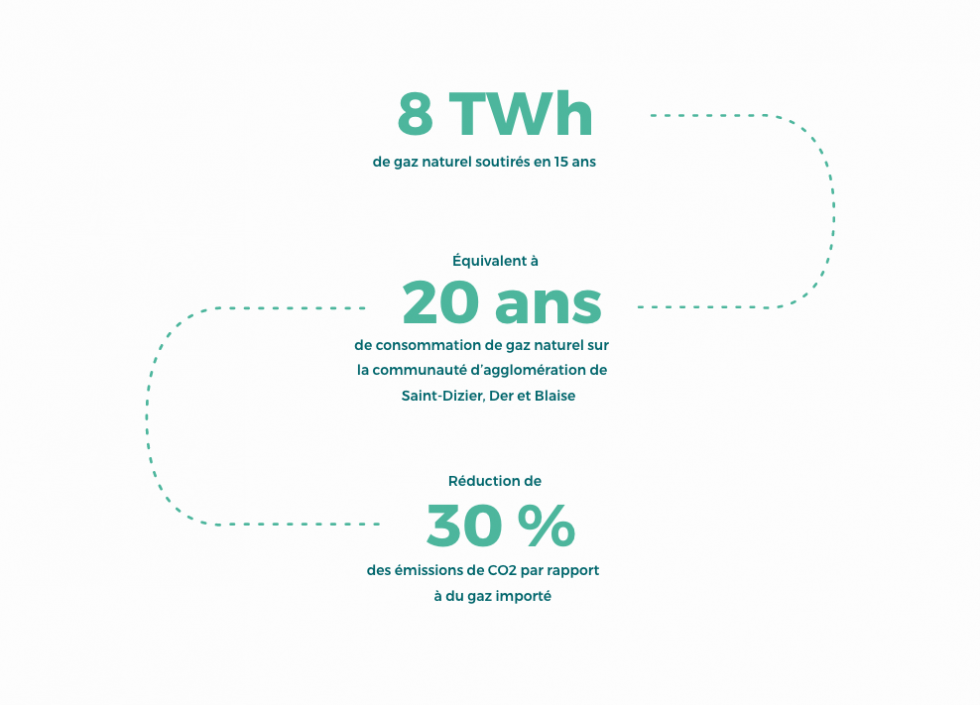 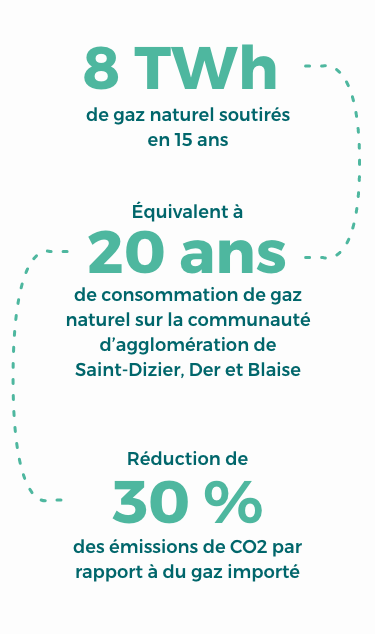 This project is going to allow for the creation of 5 direct jobs at the site and will generate direct and indirect economic benefits for its territory (taxes and royalties, restauration and accommodation, etc.).

Furthermore, in consistency with its local procurement policy, Storengy will take particular care of calling upon local businesses to respond to punctual or recurring needs identified during the construction and operational stage, such as security, green space maintenance, site maintenance works, restauration, etc.

Within the framework of the assessment of the project and in order to gather views of the residents and public on this project, a public enquiry is going to take place by order of the prefect from 16 August to 27 September 2021.

Find out more about this project at the web site of the Prefecture of the department of Marne.

1/ Why withdraw natural gas from the Trois-Fontaines-l'Abbaye underground storage site? Why not leave it there and dismantle the facilities?

The facilities already exist (no new facilities required) and allow to withdraw part of the gas which is still present inside the reservoir of the Trois-Fontaines-l'Abbaye storage site. It is estimated that the quantity of gas withdrawn will be sufficient to cover the gas consumption of the urban community of Saint-Dizier, Der and Blaise (60,000 inhabitants) for 20 years. Using this volume of gas will enable us to reduce existing imports (Norway, Algeria, Russia, etc.), thus reducing our CO2 emissions by 30%.

2/ What will the withdrawn gas be used for? How much gas will be withdrawn?

The revenues from the gas sales will enable us to dismantle and/or convert the site towards a locally co-constructed project which meets the Storengy’s and the territory's challenges linked to the energy transition.

Experts (Storengy's engineers and geologists) estimate that the restart of the Trois-Fontaines-l'Abbaye storage site will allow for the withdrawal of about 8 TWh of natural gas over 15 years, which is the equivalent of the consumption of the urban community of Saint-Dizier, Der and Blaise over 20 years.

3/ When will the works start?

In 2020, Storengy performed a complete diagnosis of the site facilities to provide better visibility on actions to be performed prior to re-commissioning the site.

In 2021, Storengy performed maintenance operations on the facilities and re-qualified structures according to the regulations. There are no major works scheduled (drilling or installation of new facilities).

In early 2022, Storengy will carry out tests and controls before proceeding to the industrial re-commissioning of the site.

4/ Does this project pose any risks?

Storengy is a nationally recognised operator. Its expertise and competences ensure a high level of safety at the sites it is operating. The project doesn’t include any new facilities and the gas pressure will decrease progressively. Thus the risks will be similar to those encountered during the former operation of the site.

In order to meet the new, more protective instructions by the public authorities, the urban protection areas around facilities, especially buried pipelines connecting wells will be expanded. Utility easements and rights of way will be integrated into the application.

Furthermore, Storengy has studied risks of seismic events induced by its operations, which generate pressure differences at great depths. A third evaluation has been carried out by the BRGM and its recommendations will be implemented. A geophone network will be installed to monitor micro-seismic activity.

5/ Why store natural gas in a depleted gas deposit?

Storage in depleted reservoirs is widely used in Europe, representing more than 40% of its storage sites. This procedure poses little risk of environmental disturbance as it is using a cavern which has already been a storage for natural resources.

6/ Why reduce the site's operation in 2012 and re-commission it today?

Due to a very difficult European context for the gas storage activity, the injection and withdrawal of gas was stopped in 2012. However, the site has always been monitored and maintained.

Ever since the reduction of its activity, the Trois-Fontaines-l'Abbaye storage site has been subject to 24/7 surveillance and a maintenance team is performing maintenance activities each week, as well as regulatory controls in accordance with the prefectural order.

If the administration is granting its authorisation, we would like to fully operate the site for about 15 years.

7/ What impact will the restart of the storage facilities have on the environment?

The Trois-Fontaines storage site is located in a Natura 2000 area with potentially exceptional biodiversity, in three French departments (Marne (51), Haute-Marne (52) et Meuse (55)) of the Grand-Est region.

As for all its sites, Storengy is involved in the National Biodiversity Strategy (SNB) and act4nature, with adapted local application at the Trois-Fontaines storage site.

In this context, we are leading local actions in favour of biodiversity, such as yellow-bellied toads, for which special arrangements have been made and are being monitored by ecologists.

We are working on the restart of the Trois-Fontaines storage site with recognised, competent partners: the National Forestry Office and the Permanent Initiative Centre for the Environment (CPIE) Sud Champagne. Concretely, actions in favour of reconstituting green and blue corridors (TVB) may be led by integrating the Regional Ecologic Consistency Scheme (SRCE). We are happy to construct the best suited solutions with the territories and local environmental associations.

8/ How long is the site going to be in operation? What will happen to the site afterwards?

It is planned to withdraw gas for approximately 15 years.

At the end of this operation, Storengy will proceed to terminating the activity of this underground storage site in accordance with the provisions of the French Environmental Code.

We would like to quickly start working with territorial players (municipalities, residents, associations,…) in the long term to think about conversion possibilities of the site in accordance with regional needs and find long-term, sustainable solutions.

9/ What is the history of this storage site?

The storage site was built in the 1980s and extends over an area of 61.9 ha. The site is a former natural gas deposit which was operated by the company COPAREX from 1980 to 1994. Gaz de France purchased the site in 1994 and continued its operation until 2006.

The hydrocarbon concession was transferred to Gaz de France by ministerial decree on 20 December 1995. The operation of the deposit was stopped in 2006, after having produced 2,000 Mm3.

The site was then adapted for conversion into an underground gas storage facility. In May 2010, Storengy is authorised to resume the of the site and its facilities.

Find out more about

Welcome to the Storengy site in Trois-Fontaines-l’Abbaye. At Storengy, we store natural gas underground. It is used in the winter to supply households, businesses and communities. In France, storage facilities cover more than 50 % if the gas demand during cold snaps. The Trois-Fontaines-l’Abbaye storage site is operated in a former natural gas deposit. That’s what we call depleted reservoir storage. Located at a depth of 1,700 metres, this reservoir 17 kilometres long and 4 kilometres wide, and extends over three French departments: Marne, Haute-Marne and Meuse. Its effective storage capacity amounts to 80 million m3, which is the equivalent of the annual natural gas consumption of the departments of Haute-Marne and Meuse. The gas is monitored through 10 observation wells which are visible at the surface. When gas is withdrawn from the reservoir, it naturally rises into the 5 production wells distributed over the plant. Then the gas circulates through different buried pipelines to the manifold, which is made up of a set of pipes with valves. As underground storage generates different impurities, the gas has to undergo several stages of treatment and safety checks. First of all, it passes through a separator which is going to dissociate liquid effluents from gaseous effluents. Then, it is directed towards a dehydration unit to remove water contained in the gas. This “withdrawal water” is collected for treatment. Before entering the transportation networks, the gas has to undergo some more checks. Its pressure is measured and increased with a compressor in case it is considered too low. Then, the gas is odorised for safety reasons and its quality is monitored in a laboratory. After measuring the outgoing volume, the gas can eventually be injected into the transmission pipelines of GRTgaz. At the Trois-Fontaines-l’Abbaye storage site, all of these operations are remotely controlled from the control room located at the Cerville storage site, in the department of Meurthe-et-Moselle. This is a genuine control round contributing to the site’s safety. hanks to its facilities and expertise, Storengy thus ensures a reliable and continuous supply of energy throughout the year. With this site, approximately 8 TWh of natural gas could be withdrawn over fifteen years. This is the equivalent of the 20 years of gas consumption for the Agglomeration Community of Saint-Dizier, Der and Blaise!

But above all, Storengy is a committed firm: committed to a Corporate Social Responsibility approach in conjunction with its various stakeholders; committed to supporting local actions in favour of biodiversity; committed to finding alternative, innovative solutions to ensure the energy transition. Because at Storengy, we want to act today to preserve the world of tomorrow.